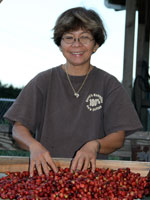 Like coffee itself, the story of the success of Rusty’s Hawaiian Coffee is bittersweet.  When Rusty and Lorie Obra moved from New Jersey to Ka‘u with a dream to coax a coffee farm out of old sugarcane land, they had no idea that seven years later, after Rusty’s untimely death, Lorie would be left on her own with a big farm and a big dream.

And Rusty was a man with a dream—to make Ka‘u coffee some of the best in the world.

Who ever heard of Ka‘u Coffee? Well…no one, until 2007 when two of the growers in the Ka‘u Coffee Growers Cooperative (which Rusty started) won 6th and 9th place in the Roaster’s Guild Cupping Pavilion Competition at the Specialty Coffee Association of America (SCAA) annual conference. Also that year, Rusty’s Hawaiian ranked in the SCAA’s top 10 in the Hawai‘i/Asia/Indonesia regional competition. 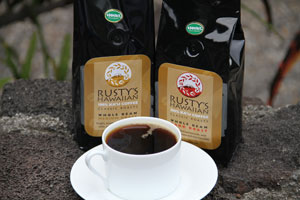 What seemed like an overnight success for Ka‘u was the result of years of painstaking and often heartbreaking work. Especially for Lorie.

For months after Rusty’s death Lorie worked and grieved, watering the soil with her tears, channeling her grief into the hard work of running the farm.

Lorie and Rusty both had scientific backgrounds, and it was this skill that gave Rusty’s Hawaiian its competitive edge. Applying herself single-mindedly to her task of making "some of the best coffee in the world" Lorie conducted endless experiments on the coffee, fine tuning the fermentation and the roasting.

Along the way, Rusty’s Hawaiian began picking up more honors, but none as prestigious as being named one of the 10 winners of the 2012 Roaster's Guild Coffees of the Year Competition. This award confirmed that she makes some of the best coffee in the world. 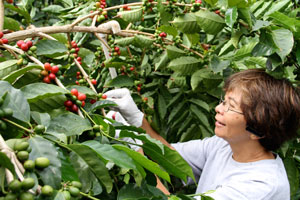 Dream complete? Time to take time to smell the coffee?

Lorie does a lot of coffee smelling, but not to kick back and relax, rather to maintain quality and continue to refine the flavors of the coffee.  Lorie does a lot of "cupping," a method of professionally evaluating coffee quality.

After all of the accolades (and there have been more!) the business has been growing steadily.

"Its always exciting being with coffee," says Lorie, "from farming to processing to roasting to doing experiments to find the best way to bring out the qualities of the coffee—every aspect is exciting to me." 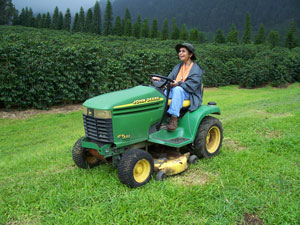 Lorie says she is not affected by caffeine. Good thing too, as she "cups" every batch before it goes out so she knows that what is being sent to customers is a good quality coffee.

How can a woman who is unaffected by caffeine get so much done? And so well? She even mows the farm!