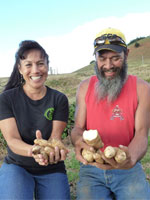 The drive along Kohala mountain road between Hawi and Waimea is one of the most beautiful in the world.  The landscape is dominated by a sea of green grass, the color ever changing with the passing of the sun and clouds. Deep green tree-covered pu‘u (cinder cones) rise up out of the landscape like giant waves. The strong wind sweeps through—bringing rain, rainbows, moonbows. Black and white cows blink their sweet eyes at passerby.

If you look carefully makai (towards the ocean) you can see rock walls and contours in the landscape. Climbing on top of Pu‘u Kehena, the vertical and horizontal delineations below become even clearer. Obvious, really. The past is hidden right under our eyes.

Dr. Peter Vitousek of Stanford University began studying the field system in 1998, trying to unlock the soil secrets of the native Hawaiians. Ulu Mau Puanui was formed as a project to re-discover and share the knowledge that the Hawaiians had with regards to dryland food production.

“Our goal at Ulu Maui Puanui is to educate as many people as possible about the historical significance of the Kohala field system, that the Kohala field system is here and how it fed the people in ancient times,” says Project Coordinator Kehaulani Marshall. “We look to Puanui to inform future food sustainability projects. We can look to the past and apply those practices for our food needs in the future.”

The Kohala field system was one of a number of dryland field systems on Hawai‘i Island that provided massive amounts of food for the population.

The primary crops in the Kohala field system were ‘uala (sweetpotao) and kō (sugar cane). The ‘uala was planted in mounds between the rows of kō. The kō served a number of purposes, it caught and sprinkled rain on the ‘uala, was a critical source of mulch and provided some wind protection.

“If we look at the geographic set up of the island, much of the island is dry. In ancient times there were only five producing kalo (taro) valleys. Those valleys were not enough to feed all of the people. What were people eating? Vast dryland field systems in Kohala, Ka‘u and Kona were producing sweetpotato,” says Kehaulani.

How many different kinds of Hawaiian sweet potatoes have you eaten?

According to Specialty Crops for Pacific Island Agroforestry in pre-contact Hawai’i—there were 230 sweetpotato cultivars, by 1940, only 24 were still being grown. Today, there are about five varieties being commonly grown in Hawai‘i, with two most common for commercial production.

Ala Lindsey is the man with his hands in the dirt at Puanui—planting and caring for the ‘uala. While working with the project, Aurora Kagawa from Stanford University and Ala were growing 20 varieties. Currently, they have 10 growing on site.

Ala has employed the natural relationship between the pig and the potato. “I was taught from my Dad, his Dad and my great grandfather that we use the pigs to till the ground so it’s easier for me, so I don’t have to do all the hard work.  The pigs will till the ground—I will come behind, mound the ground, plant the sweetpotato cuttings and wait until the potatoes are ready, a good 3-4 months from planting. After harvesting, we will put the pigs back where the sweetpotato were. They will clean up whatever I missed, fertilize the ground and then I can plant more cuttings.”

They have observed at Ulu Mau Puanui that they get better production when they use the pigs for pre and post tilling and clean up!

This relationship between the ‘uala and the pua‘a (pig) is recognized in Hawaiian culture. Indeed, the ‘uala is a kinolau—plant form or embodiment—of the pua‘a. Look closely and you can see the pua‘a snout and ears in the leaf.

The power of Puanui is indescribable. The wind is so strong at times it can almost blow you off your feet, and yet one feels grounded, rooted to the land.

Clearly, this is a place where heaven and earth meet. Where ancient knowledge comes forth to help Hawai‘i’s people today.