Terroir is a French word that describes the “sense of place” that you can taste in an agricultural product. According to Wikipedia, the concept of terroir “is the special characteristics that the geography, geology and climate of a certain place, interacting with the plant's genetics, expressed in agricultural products.” Most frequently applied to wine, terroir is also used to explain the unique taste qualities in coffee, cheese, tea and…honey! It may be a little hard to explain terroir, but it is easy to taste it. Especially when we are talking about the Organic White Honey from Volcano Island Honey Company.

The award-winning honey has oft been touted as one of the finest honeys in the world. When asked what makes the honey so special, beekeeper and company owner Richard Spiegel is quick to point out that it is the place itself—the kiawe forest of Puako, that gives the honey its innate, unique characteristics—along with experience, skill and meticulous handling of this extremely delicate honey. 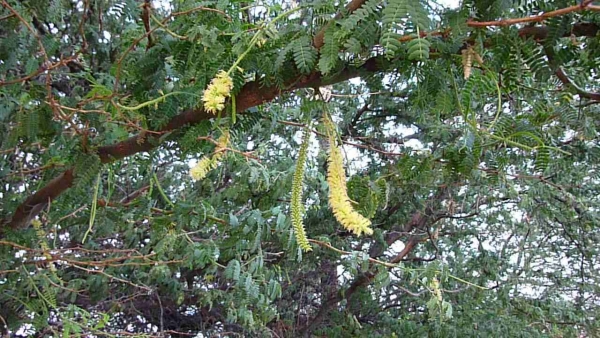 Kiawe, often considered somewhat of a pesky tree in Hawai‘i because of its thorny branches, is the tree that produces the abundant long yellow flowers that the bees feast upon to produce this creamy, white, one of a kind honey. Who would guess that such a sweet treat comes from such prickly place?

Kiawe (Prosopis pallida) is a species of the mesquite tree that was brought to Hawai‘i to produce cattle fodder, the trees grow well in hot, dry places and the yellow beans once provided a high protein food for cattle. It turns out that the kiawe bean is also a very versatile food for people as well—it can be made into flour, sweet syrup and many other products. Kiawe products are commonplace in some regions of South America. Kiawe wood, of course, is also highly prized. Taken all together, a forest of kiawe is not the dry wasteland it is often accused of being, but actually an incredible, unique, dry land   ecosystem and community resource. What are the benefits of a kiawe forest? A renewable wood source for artisan woodworkers, energy, charcoal, firewood or fence posts; high-protein, gluten-free flour from the beans that can be used as a base ingredient in other products; and some of the best honey in the world.

Puako, known today for its luxury coastal homes and pristine coastal waters, is also the home to the largest, most verdant, contiguous kiawe forest in the State. The Volcano Island Honey Company bees forage among 1,000 acres of kiawe in the Puako region—half of the forest is privately owned and half is owned by the State of Hawai‘i.

Threatened by the possibility of development, Richard Spiegel has been working to preserve and sustainably manage the forest for 30 years. Not only is the kiawe forest a critical bee habitat, which is vitally important to saving bees in Hawai‘i at this point in time, but it is also an undervalued community resource.

“People have no idea about the food value in the forest,” says Spiegel, “When the ships stop coming, the kiawe forest will be a place that we can look to provide protein.”

Other kiawe honeys in the state are good, but none have the same quality, or terroir, as Volcano Island Honey Company’s Organic White Honey. How could they? After all, it is the special qualities of that unique kiawe oasis that imbue the product…the deep fresh water aquifer that feeds the trees, the sunshine, the salt air, ancient Hawaiian culture, and the profusely flowering trees themselves.